Royal Wellington has built up an enviable collection of reciprocals with notable clubs here in New Zealand and around the world. These arrangements don’t happen by chance; they are the product of decades of connections forged here and overseas by club members.

Royal Wellington’s most lingering association was established through an inter-island golf match. The Tuson Cup was named for (then) Colonel Harry Tuson, who was seconded from England to the New Zealand Army in 1907 and spent three years in New Zealand. He was an honorary member of Wellington Golf Club during his time in the capital and before he left, he showed his appreciation by donating a trophy to the club. By then, the club had already played the Christchurch Golf Club in a match and it was decided to make this a bi-annual event, with the Tuson Cup as the prize. The first year it was awarded was 1910. 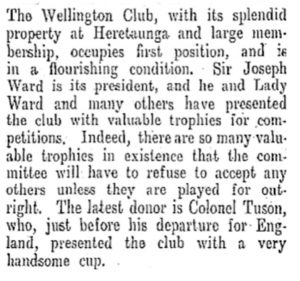 Eventually it was reduced to an annual match, but it has remained a hugely important event for both clubs. In the 1920s it was extended to veterans of the Tuson, who played for a salver, and still do. In the days before plane travel, it required a trip on the Union Steam Ship company’s Rangatira, Maori or Wahine between Wellington and Lyttelton. For decades, the team would sail overnight on Friday night, play twice on Saturday, attend dinner, then sail back overnight for an arrival back in Wellington on Sunday morning. This was hugely social, but, understandably also rather exhausting. Still, competitors came back year after year to renew strong associations. Today, teams fly between the centres and it is a somewhat more leisurely affair, although still just as sociable.

Oddly, because it seemingly came out of the blue from the other side of the world, the club’s first formal reciprocation was with Royal Wimbledon Golf Club in 1946. This connection was cemented the following year when the women of our club organised food parcels to Royal Wimbledon to support the Ladies Golf Union’s post-war ‘Food for Britain’ campaign. As a mark of thanks, Royal Wimbledon sent trophies for club competitions.

The second reciprocation led to the club’s longest-standing Australian connection. A meeting in Wellington attended by Metropolitan Golf Club member Dr Guy Springthorpe and Wellington Golf Club member Dr Ed Giesen in 1963 led to a game at Heretaunga and socialising with members. Springthorpe enjoyed himself so much that he single-handedly engineered an invitation for reciprocity, which was accepted and followed by a visit from Metropolitan in 1964. A biennial visit from each club in turn followed and it remains a highlight of each club’s calendar. 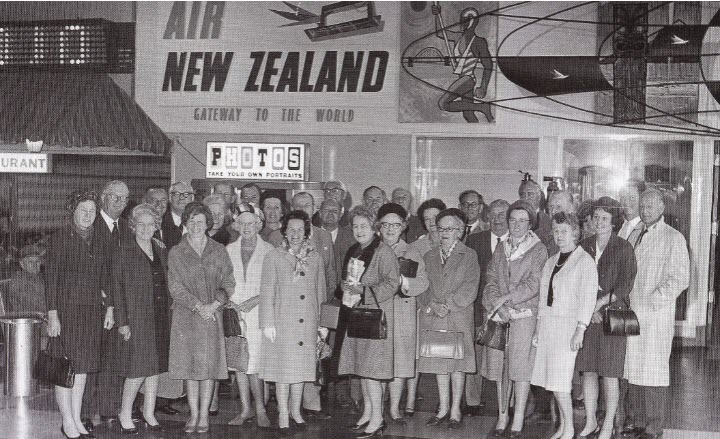 The men and women of the Wellington Golf Club leaving Wellington to fly to Melbourne for the first return visit to Metropolitan Golf Club, 1966

The arrival of the Metropolitan connection coincided with the rapid rise of international air travel. New Zealanders have always been great travellers, Royal Wellington Golf Club members particularly so, but regular international flights opened up greater opportunities to expand the club’s connections. Reciprocation with Royal Sydney followed in 1975, while trips to the eastern Australian seaboard led to many more reciprocations and more bi-annual matches (all mixed it must be noted), including Royal Sydney and, much later, The Australian Golf Club. A match with Royal Melbourne is also now incorporated into the Metropolitan visit. Reciprocal arrangements were also made with Royals Adelaide, Queensland, Canberra and Perth and Lake Karrinyup, also in Perth.

Domestic connections are also vitally important to the club. One important event is the Heremore Plate, an annual match with Royal Auckland Golf Club that was established in the 1950s. The top teams play for the Prince of Wales Feathers trophy, which was first played in 1981. Members are billeted in each other’s homes, which has helped build some strong and long-standing friendships. An entirely different kind of traditional is the Bidwell-Leckie Cup, which has been played annually against Martinborough Golf Club since the 1950s. Always played at Martinborough, it commemorates the influential Bidwell farming family from Wairarapa and the hard work of long-time Royal Wellington member Willie Leckie, who helped establish the event. The Leckie family remains engaged in the event and its organisation. 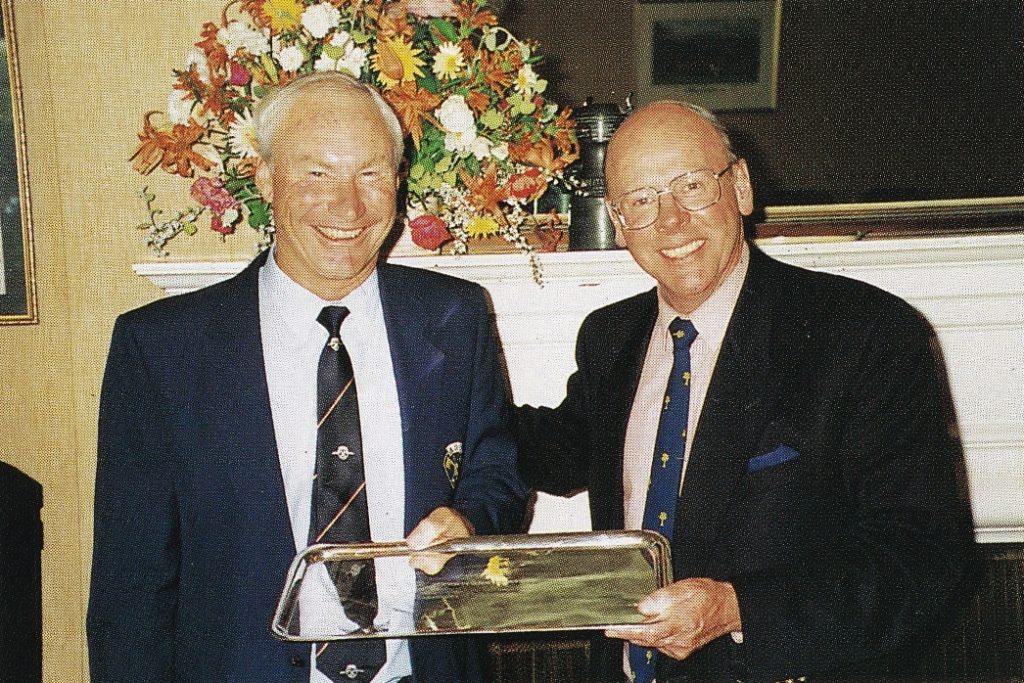 Royal Wellington’s women also have a traditional competition with Martinborough Golf Club, played for annually since 1968. The Lady Stout Cup was donated by Agnes Stout, née Pearce, known as ‘Pickle,’ who married Sir Duncan Stout, son of former Premier and Chief Justice Sir Robert Stout. The event, which also celebrates the strong connections between the clubs and south Wairarapa families, alternates between the two clubs. 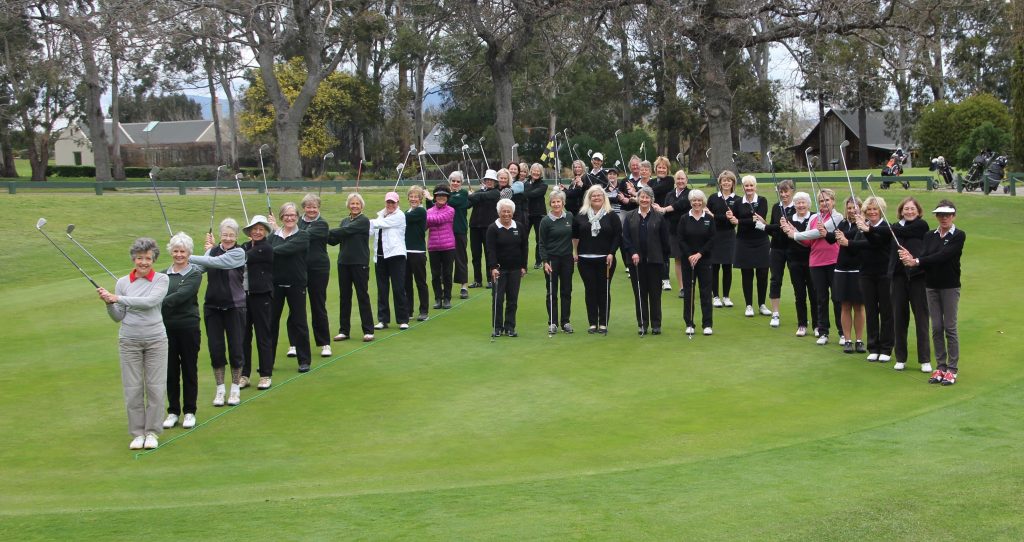 A crucial milestone in Royal Wellington’s connections with world golf was the bestowal of royal status in 2004. Much coveted, this status was acquired not by lobbying but by patient relationship-building over decades. Much of that was done by Royal Wellington’s R&A members. The connection with the R&A, which goes back many decades, brought Royal Wellington into a wider fellowship of clubs and it was this broader group who were represented at the formal opening of the new course in 2014. 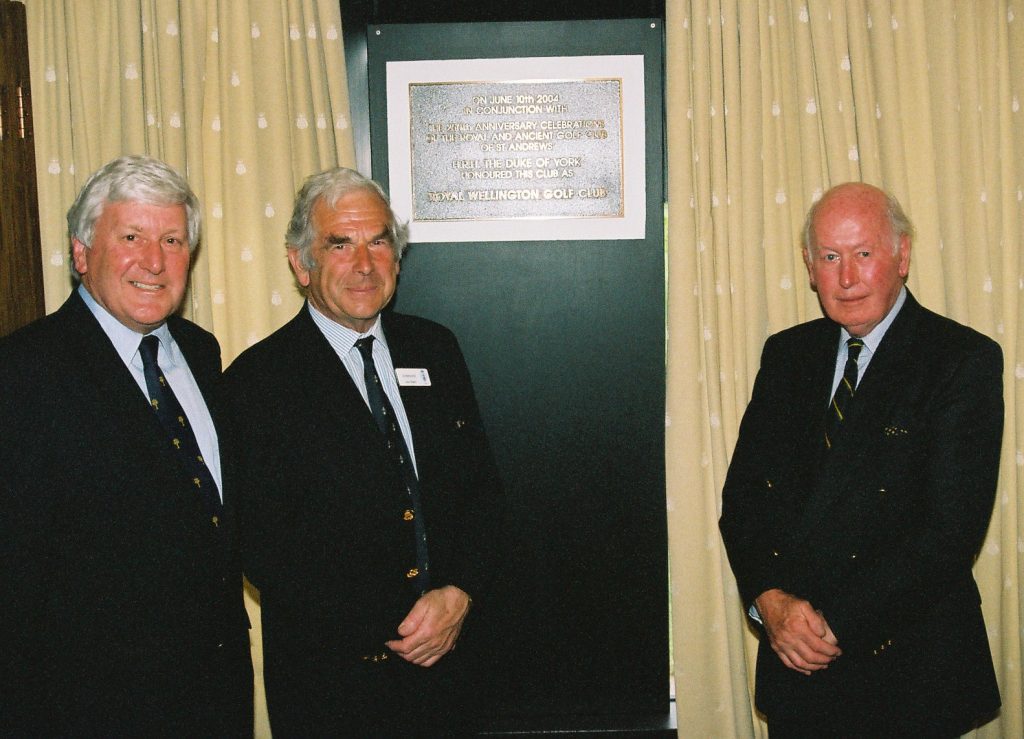 Linked to this is the Lucifer Golfing Society, established in 1921, which holds a hugely popular Commonwealth event every summer in London that has been attended by a number of Royal Wellington members over the years. Golf at some of London’s finest golf courses culminates in dinner at the Savoy. Lucifer members have also visited Royal Wellington on organised tours.

At least 19 of our reciprocations have come since 2000. Some of these have come via diplomatic networks. Royal Wellington has generally been the club most frequented by foreign diplomats posted to Wellington. Some ambassadors and their staff have enjoyed their time so much they have initiated reciprocations on their return to their home clubs. It’s not one-way though. New Zealand diplomats who are also club members have initiated some of these connections, particularly in Asia.

Royal Wellington is more connected with the world of golf than it has ever been. It is the culmination of generations of golf and hospitality here and around the world. We have inherited a legacy that leaves us well regarded internationally and with opportunities to play, at no cost, at great golf courses.