Royal Wellington has hosted a great many important golf events, stretching back to the club’s very beginning. They have provided us some historic moments and given the club the opportunity to show off both the golf course and our celebrated hospitality.

When golf was in its infancy in New Zealand, just having a course to play national championships on was all but sufficient to be handed hosting rights. The first national event at the club’s Miramar course was the women’s amateur championship in 1896, just a year after the course opened. The field was small but the final attracted 200 spectators to the remote location. It was held again in 1903 and won by Vida Pearce, a founding member of the club. The men’s amateur championship was held in 1899 with 64 competitors. The final was won by Arthur Duncan, the first of his 10 national championships but the only one he won on his own course. 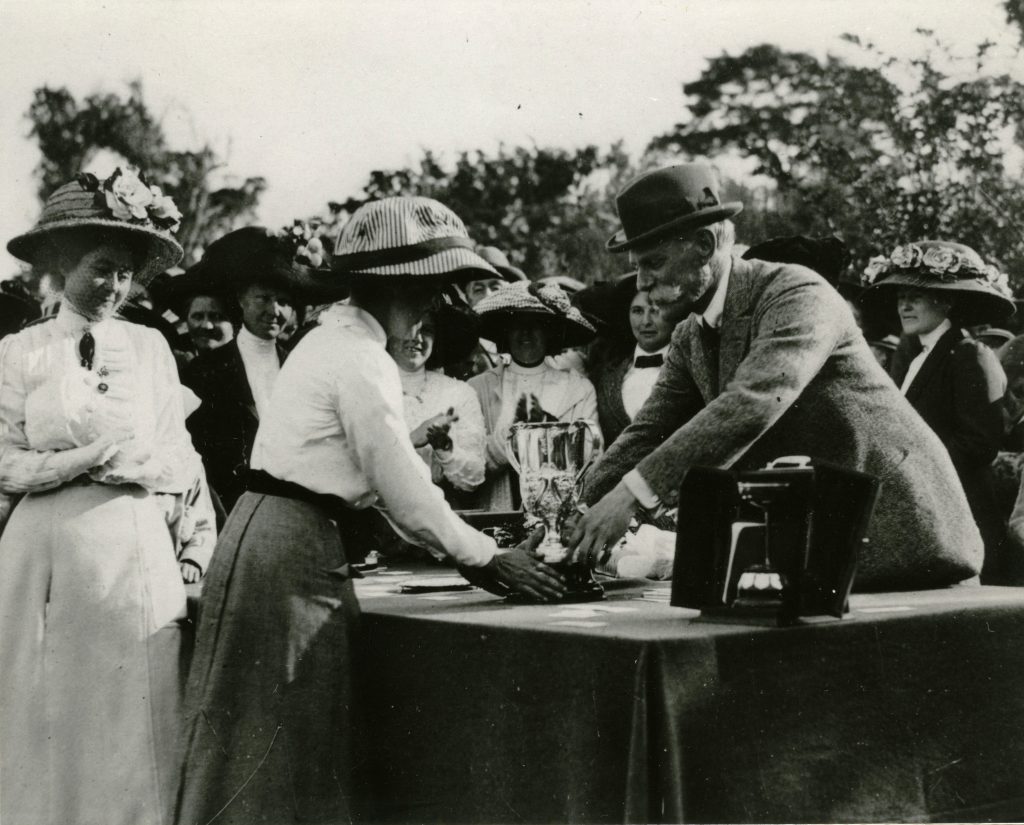 The move to Heretaunga had to be bedded in before any event could be held there. Nevertheless, it was just three years after the course opened that it hosted the New Zealand Ladies’ Amateur Championship in 1911. This turned out to be a pivotal event for the club. It attracted much media and public attention, the Governor, Lord Islington, attended the final, member Lucy Brandon won and the championship and the course were lauded. It no doubt helped that the club went to the trouble of putting competitors up in a brand-new extension to the clubhouse. Perhaps unsurprisingly, this success saw the club handed the hosting of the 1912 New Zealand Open (first played in 1907) and amateur championships. Unfortunately, the weather did not co-operate and a hoped-for win by Arthur Duncan did not eventuate. 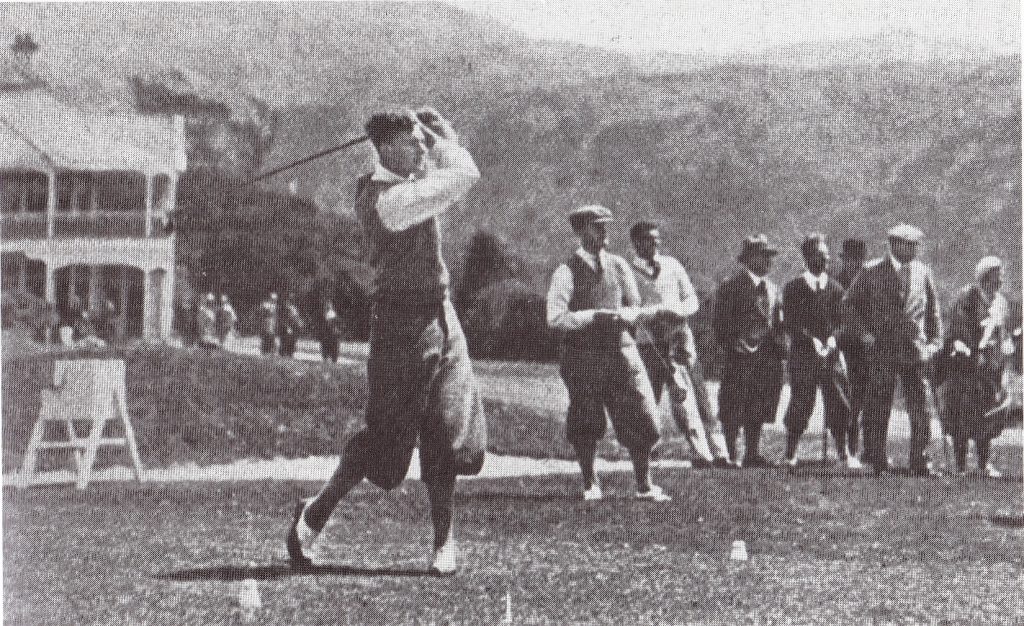 John Hornabrook, two-time winner of the New Zealand Open, teeing off the old 16th (later the 11th and now the 1st tee on the Terrace course) in the 1932 championships. (Auckland Weekly News)

It was not until 1932, during the height of the Depression, that the club again hosted the New Zealand Open Championship. Without the money to pour into improvements, the club spared no effort in bringing the fairways and greens up to championship standard. The course was again praised and for the first time, progress in the tournament was reported on the radio.

In 1935, the club hosted a match between New Zealand and a British team representing the R & A. Post-war, an Australian Golf Union team played New Zealand at the club in 1947. Arguably the most memorable national championship at Royal Wellington took place in 1954, when Bob Charles won the New Zealand Open as an 18-year-old amateur, beating the Australians Peter Thomson and Bruce Crampton in the process. Charles also finished second, to Tim Woon, in the amateur final.

The famous image of Bob Charles being carried away by his supporters after his win in the 1954 New Zealand Open. (Terry McLean – New Zealand Golf Illustrated)

In 1964, the club hosted a non-championship professional event, the Wills Classic. Australian Ted Ball was the victor, helped considerably by a course-record 63 in the first round. The bi-annual women’s Tasman Cup (between New Zealand and Australia) was played at Wellington Golf Club in 1968 and the locals won. The club hosted the event again in 1987 and in 2008 and 2010. The best New Zealand managed was a tie, in 1987.

In the wake of the opening of the revamped championship course in 1974, the club hosted a string of professional events. The first was in 1976, when Simon Owen was a worthy local winner of the New Zealand Open. By this time, New Zealand championships (opens and amateurs) were played separately. Australian David Graham won the 1979 Air New Zealand / Shell Open in blustery winds, but the tournament was overshadowed by the shocking news of the crash on Mt Erebus of an Air New Zealand scenic flight to Antarctic. In 1981, the now sponsored BP New Zealand Open was again affected by strong winds. It was won by the Australian Bob Shearer. Courtesy of running the tented hospitality, the club made a healthy profit.

In April 1986, the club hosted the Sloan Morpeth and Clare Higson Trophies (now played under the umbrella of the Trans-Tasman Cup) between Australian and New Zealand. It was won by the former. Since then, the club has hosted two more Trans-Tasman Cups (in 2008 and 2010). 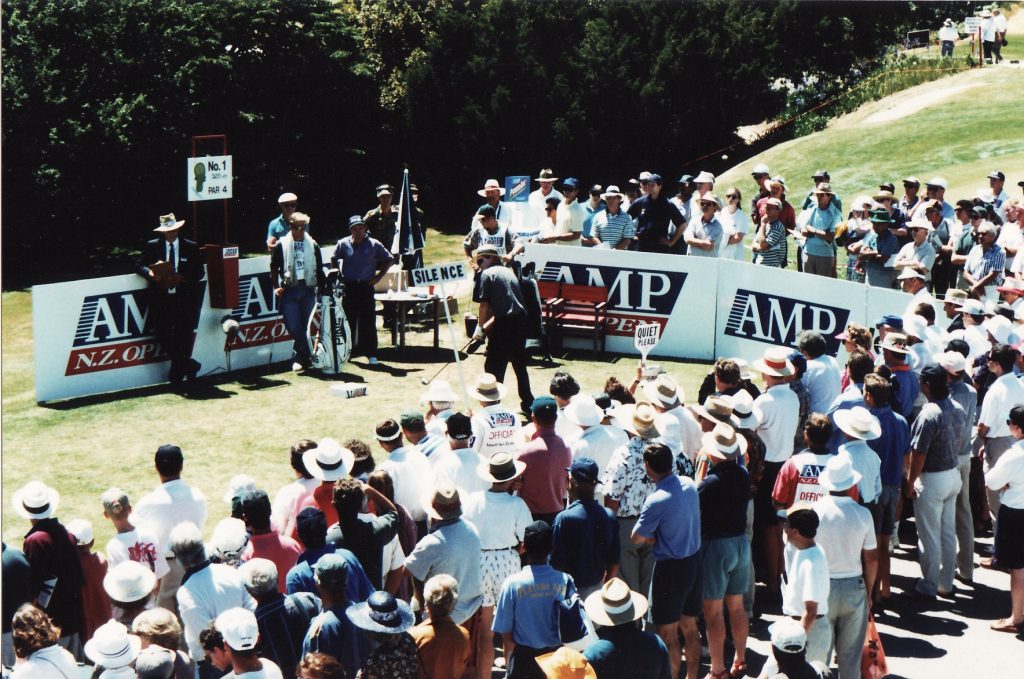 Spectators surrounding the first tee during the 1995 tournament.

In 1987, another memorable New Zealand Nissan Open took place. Irishman Ronan Rafferty and American Larry Nelson were tied at the conclusion of 72 holes and with Nelson in a hurry to get to the airport, agreed to share the title. NZGA executive director Grant Clements asked them to keep going and Rafferty won on the third extra hole. By then, a helicopter was waiting to whisk Nelson away.

In 1995, to help celebrate its centenary, the club hosted its most recent New Zealand Open. In fine, warm weather the course and its new sand greens proved no pushover. The event was won by Australian Lucas Parsons at -6.

Boosted by its hosting of the men’s and women’s amateur championships in 2016, the club took on the most significant amateur event ever hosted in New Zealand – the Asia-Pacific Amateur Championship in 2017. Organised by the Asia-Pacific Golf Confederation and first played in 2009, it is run in conjunction with the Masters Tournament and The R&A. Played in perfect weather on an immaculately presented new championship course, it showcased the club and the Wellington region to an international television audience. This was followed a year later by another major amateur event, the Annika Invitational Australasia, open to girls and young women from 12-18 years of age. 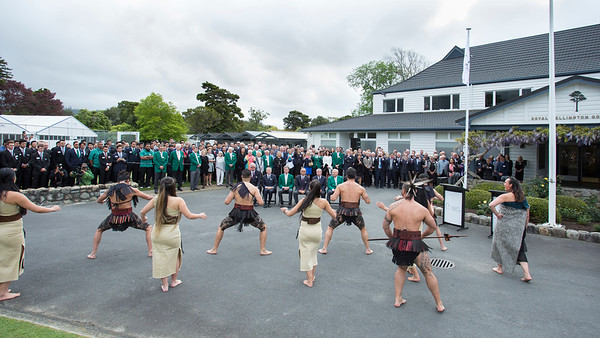 That is a summary of only some of the events the club has hosted. National and North Island stroke play, foursomes, age group and inter-provincial championships have all been played, more than once, at Royal Wellington. The club has always been pleased to host tournaments and show off the beauty and the quality of its course.