Anyone visiting Royal Wellington for the first time is immediately aware of the established landscape. It looks settled, mature and carefully managed. When the club took over the Barton farmland in 1907, it was a long way from the glory it became. However, there was great promise; the area near the river was lovely, and among the grassed paddocks were pockets of native bush and isolated trees that would become very important in future years. These trees were the remnants of the podocarp forest that filled the valley before European settlers removed it for farming. There were large, ancient specimens of kahikatea, along with totara, matai, miro, kanuka, tawa, mahoe and titoki, among others. 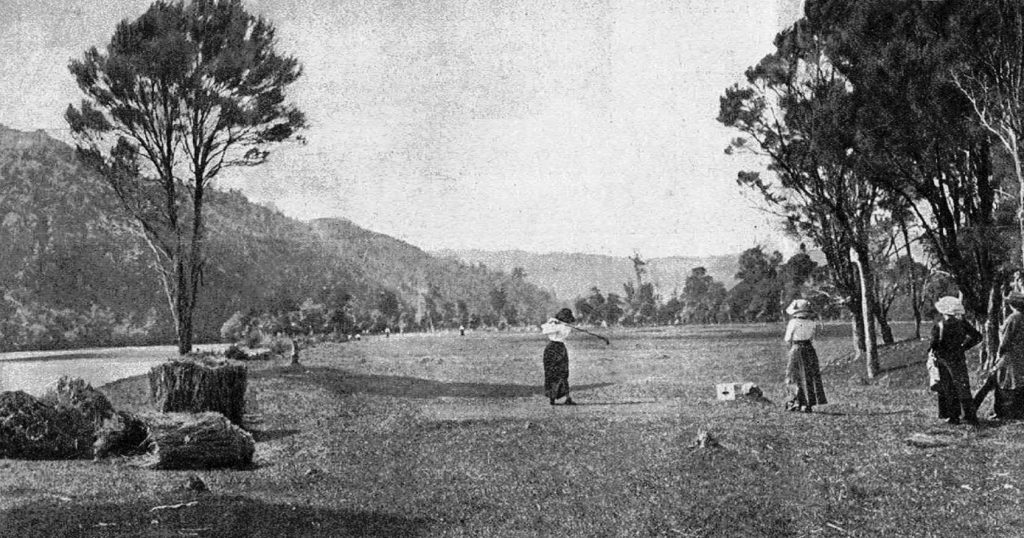 A remarkable image from the 1911 New Zealand Ladies Amateur Championship showing the old 4th hole, a long par 3, which was eventually lost to the Hutt River in the 1960s. The beauty of the course and its location is already evident. (Auckland Weekly News).

At the outset, the club took delivery of hundreds of plants and saplings from Horton’s nursery in Hastings to begin the business of beautifying the landscape. Many of the trees planted then and in the decades that followed – between fairways and along boundaries and rivers – were exotics, generally from the northern hemisphere, that still feature throughout the course and give us a wonderful variety of seasonal colours. These were augmented by the native trees, which the club, wisely, left alone. One obvious exception to this was the area behind the club house which was slowly cleared as space was needed.

The club was also the steward of two water courses – the Maewahakona Stream and a spring-fed creek that runs to the west. The former never runs dry and has been a most useful source of water for the club, particularly for irrigation. These streams are also beset with weeds, a problem since the course was founded. Many a working bee has been held over the decades to try and get on top of the problem. An attempt in the late 1990s to use carp to control the weed ended quickly when they were picked off by shags. 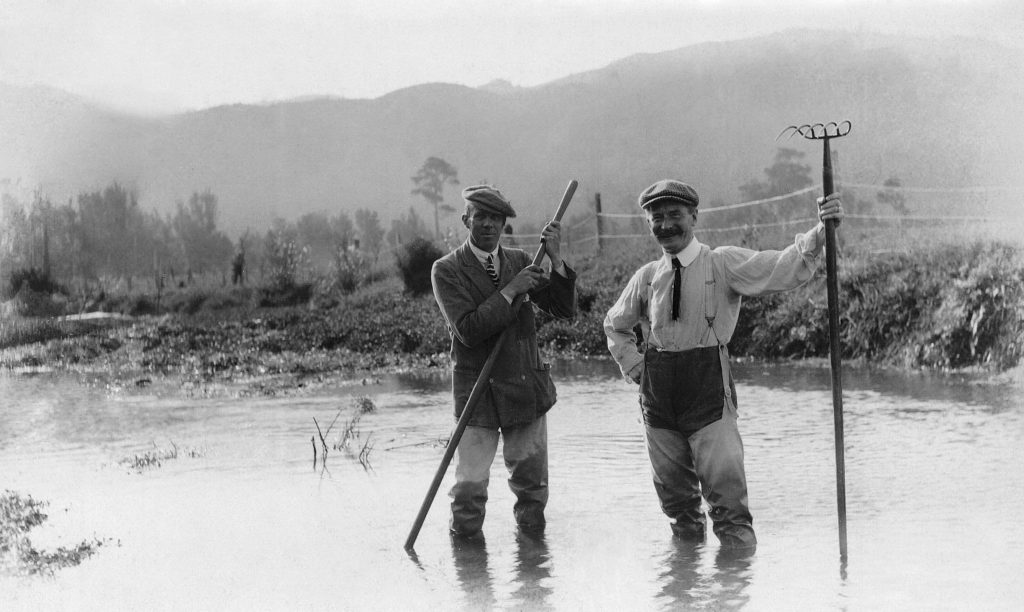 Weed removal, probably about the time of the course opening in 1908.

A remarkable aspect of the club’s management of the course since its inception has been the voluntary effort of sub-committees devoted to the long-term planning and management of the club’s plantings. In 1908, the club’s first captain, the prominent lawyer Leonard Tripp, became the first secretary of what became known (for a period anyway) as the Plantations and Tree Sub-committee. He was still serving on the committee in the 1950s, by which time he was in his 90s. The committee has had various other names, but today it lives on as the Tree Advisory Group.

These sub-committees were composed of men and women who were driven by a desire to make the golf course as appealing as possible. They often poured their own money into plantings and just as often did the work themselves. They had to plant with foresight, sometimes with decades ahead in mind. Aerial images from the mid-20th century confirm that many of the trees planted in early years were slow growers and did not begin to show their full glory until well into the second half of the century. The people who planted them would have known that, but could see the benefit of long-term planning. Likewise, when quick growth was needed, faster growing trees were employed and then removed in favour of longer lasting varieties once these were established.

Along with the club’s greenkeepers, a number of individuals have left their mark on the course’s trees. Some had areas of the course they personally looked after; others used their specialties to particular affect. Many were keen gardeners. Early contributions were made by the likes of sisters Vida Pearce and Isobel Collins, and later Greta Hunter. Leonard Tripp’s work was picked up from the late 1930s by Geoffrey Goodwin, a forester himself. Goodwin, who set up in business with Sir Francis Chichester, the pioneering aviator and sailor, also planted hundreds of trees on the Pinehaven hills. Goodwin began a major planting programme at the club and provided his expertise for 40 years. 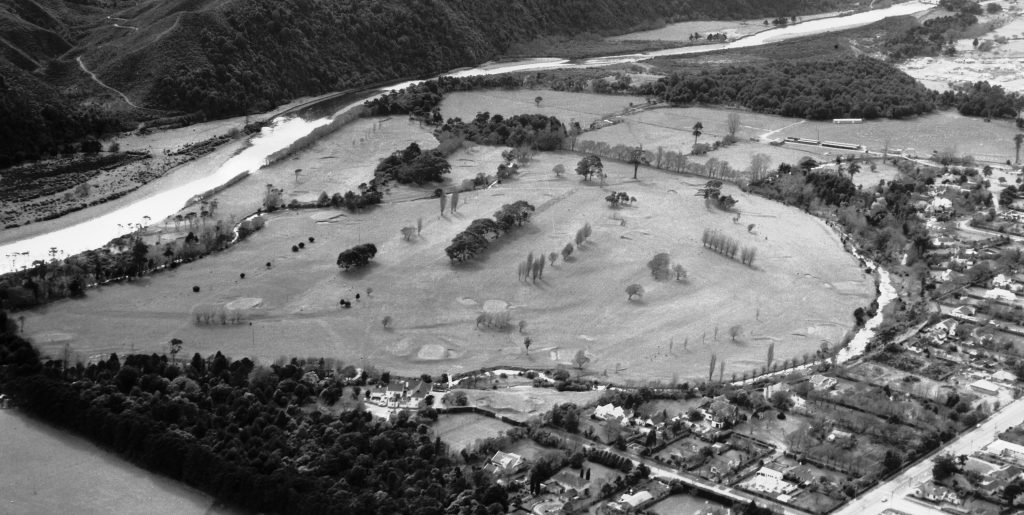 This aerial image from 1958 shows how much less substantial the rows of trees marking fairway boundaries were compared with today. (WA-4702-F, Alexander Turnbull Library).

Tom Hewitt, captain in 1962-63, took up Goodwin’s mantle and kept the tree planting going after he left the captaincy. It remained a passion of his for the rest of his life. Arguably the most important project he led was the planting of the six new holes that were put in play in early 1974. The benefits of that work are with us today.

By the time Tom Hewitt retired in 1991, he was a committee of one. He was replaced by Peter Martin (later captain and president of the club), who convened a new committee of three. Just as passionate as his predecessor, he was on the Tree Advisory Group until 2020, when he was replaced as convenor by former women’s captain Joy Bourke. Joy has herself done decades of work on the course and worked with Peter on the group for over 20 years. Joy led the design of the landscaping and replanting of the Terrace bank in shrubs, grasses and bushes in 2004, to great success. Both Joy and Peter were heavily involved in the work to plant the new holes in the Heretaunga course and this work continued long after it was opened in 2013. The benefits of this will take decades to realise, but eventually the whole course will feel much more enclosed and intimate than it is today. 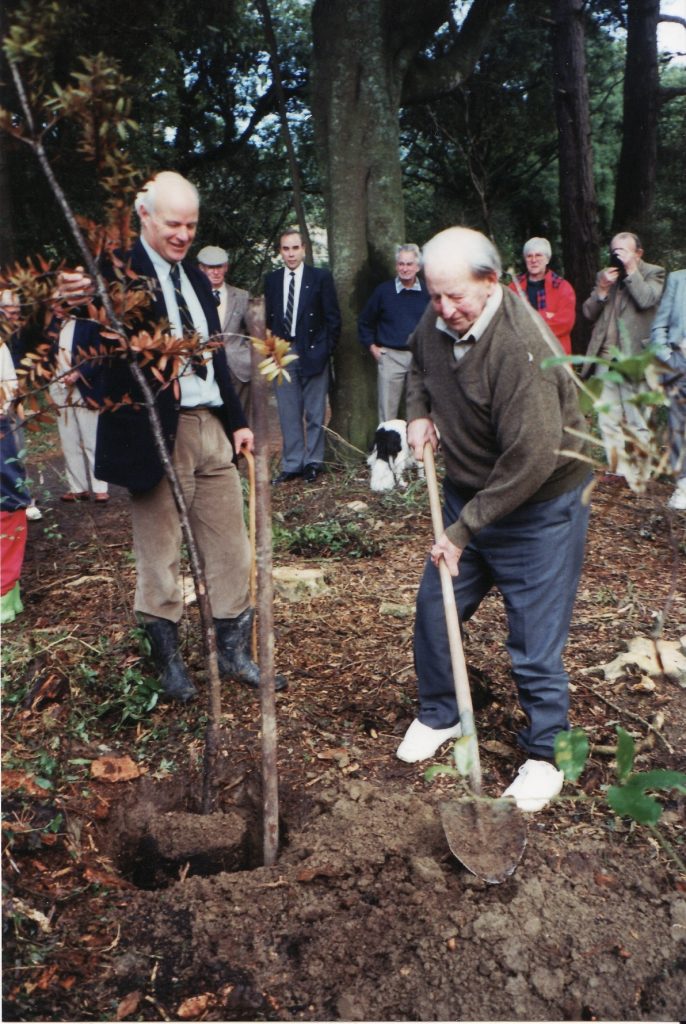 Peter Martin helps Tom Hewitt plant a kauri as part of the 1995 centennial celebrations. Out of shot is Sir Thaddeus McCarthy, former president of the Court of Appeal, who also planted a kauri. Sir Thaddeus was also a keen contributor to tree planning. You can see the two flourishing kauri today on the walk from the 13th green to the 14th tee.

The Tree Advisory Group takes care to ensure that plantings do not impinge on the integrity and playability of the course – that trees are not planted where grass growth might later be inhibited and trees that overly shade greens or fairways are removed. Trees grow, of course, and any that crowd each other are pruned or removed to ensure that specimens can be seen in the round. Royal Wellington has a remarkably broad collection of trees, so keeping examples of each is also important.  By contrast, the native copses are largely left to take their natural course and if a tree falls, it is left where it is. However, invasive weeds are aggressively managed, as are self-seeding exotic trees. Where possible, native copses are expanded with new planting.

As Peter Martin says, the course is really an arboretum through which we play golf. For 112 years, the men and women of this club have planned, planted and managed a great collection of trees to deliver a parkland experience like no other in New Zealand golf. We have to be grateful for their foresight.