At first glance, it is hard to see the original clubhouse in today’s building. The changes wrought on the building are not dissimilar to what has happened to the golf course. The original building is in there somewhere though and this is the story of well over a century of expansion, renovation and modernisation.

The original clubhouse, which opened on 25 April 1908, was designed by Crichton and McKay, well-respected and skilful architects whose greatest claim to fame was probably their work for the Wellington Hospital Board. One notable example that remains is the former Fever Hospital (now SPCA headquarters) on Mt Victoria (1918). Remarkably, the firm continued until 2018, most recently as Bulleyment Fortune Architects. The builders were Manning and Broadfoot and their successful tender was £2,112. Construction was supervised, in part, by John Coom, chief engineer of the New Zealand Railways, who was by then on his second stint as captain of the golf club.  The timber, all native, was brought in from the Manawatu. 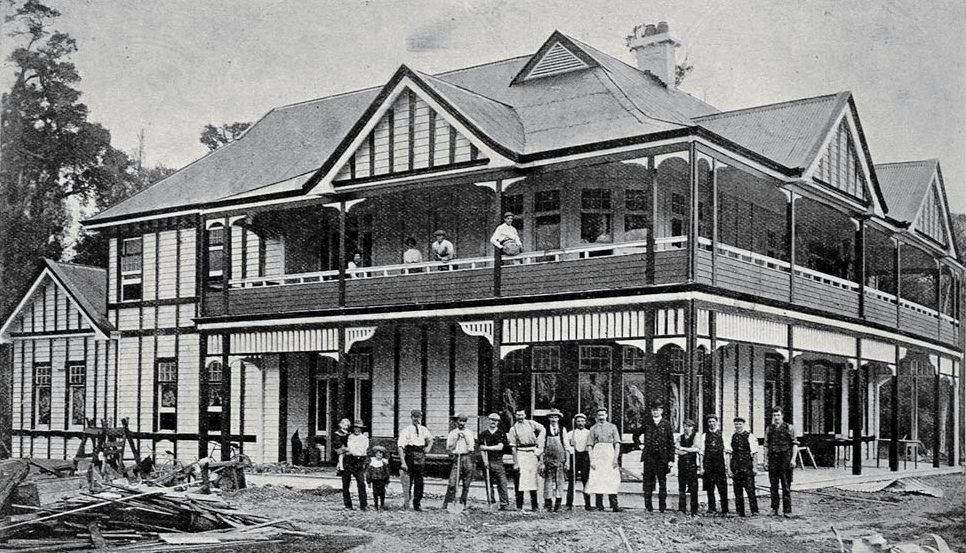 The clubhouse nearing completion. The employees of Manning and Broadfoot and others posing for a photographer from the Auckland Weekly News in early April 1908. (Auckland Libraries, AWNS-19080423-12-2)

William Crichton and James McKay designed a building that strongly resembled the kind of large Edwardian houses being built for well-to-do farmers in the lower North Island. They employed a mock version of half-timbering, where boards laid over the weatherboarding were picked out in a dark colour (black mainly) to resemble buildings constructed in the Middle Ages, particularly in England. That, together with the deep and extensive balconies, with ornamental trimmings, gave the building a highly decorative and elegant appearance. It was just one of the ways that the club demonstrated its commitment to – and confidence in – its new home at Heretaunga.

When built, the clubhouse layout was described by the Dominion:

On the ground floor are situated the general luncheon room, the gentlemen’s smoking room, and running back behind this is the gentlemen’s dressing room, a large room where lockers and clubs are kept. Upstairs, over the luncheon room, is the ladies’ dressing room, well-furnished and provided with lockers, and next door is their sitting-room. A set of rooms behind this is set aside for the use of the caretaker of the links and his wife, who acts as housekeeper.

The first major change came in 1911, when, in anticipation of the New Zealand Ladies Amateur Championships, the club borrowed £1,000 and built a second-storey extension on the south side of the building to provide the competitors with overnight accommodation. This was thereafter let as single or double rooms to members or visitors. A single men’s dormitory was formed in the attic. This was the first residential accommodation provided in any golf club in New Zealand. 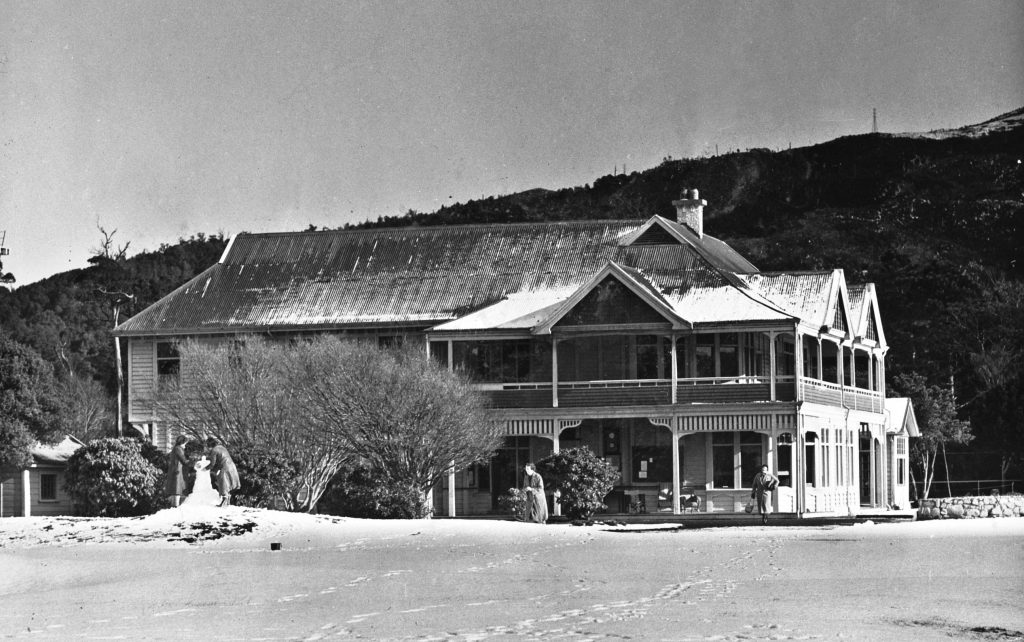 The clubhouse was used as a military convalescent hospital in 1915. There was an unspecified but major alteration late in 1925, assumed to be the addition of the 20th – the dining room. Part of the north wall of the 19th was extended out to the edge of the verandah and this may have been done at the same time. 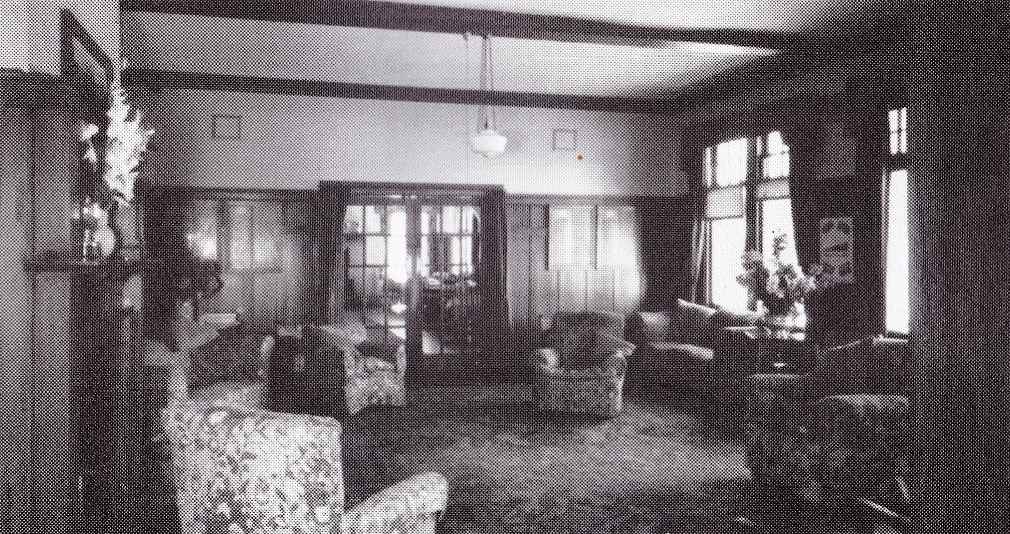 The next major change came in 1956, when additions to both floors on the north elevation removed what remained of the verandah on that side of the house.  In 1961, the club built the secretary / manager (the equivalent of today’s chief executive) a two-storey flat, which adjoined the west end of the 20th. 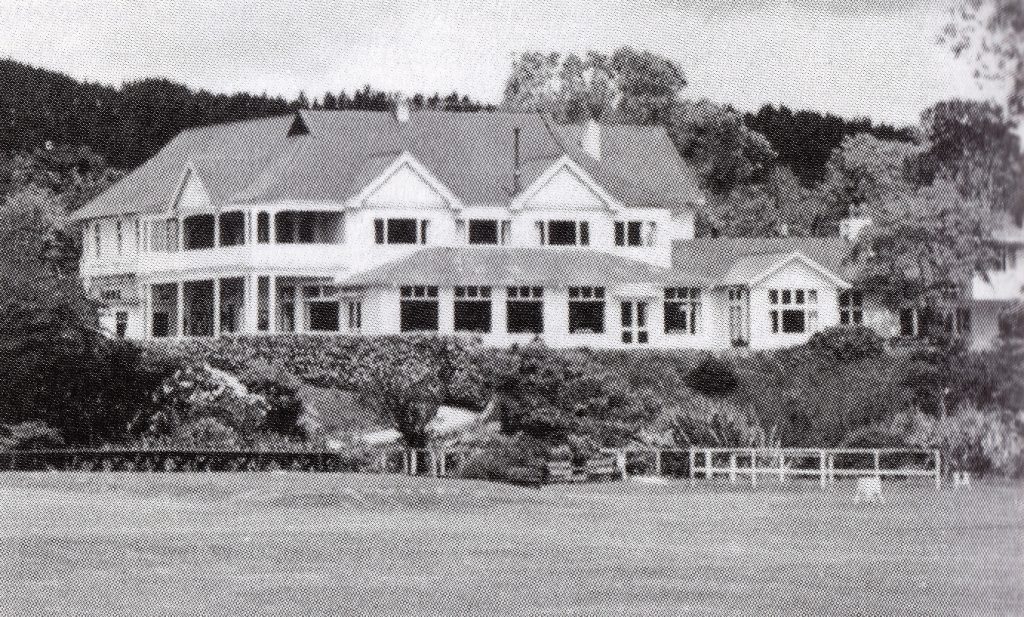 The clubhouse in 1964, after the additions to the north elevation.

Additions to the building were generally a response to increases in membership and this became of prime importance when the golf course expanded to 27 holes in 1974 and more members were admitted to fill the extra capacity. In anticipation of that, a major renovation to the building was planned. The project was steered by Richard Peacock, in his second stint as captain, whose wife Leslie took charge of redecorating the clubhouse interior. The changes were designed by architect and member Bruce Girdlestone and the work undertaken by local contractor Ted Bold. Gone went the last surviving portion of verandah, on the east side. An extension to the ground floor on the north and east elevations pushed the walls out even further and a porte cochère was added to the front of a revamped entrance. The corrugated iron roof was replaced with tiles. The provision of overnight accommodation was ended and the ladies’ locker room expanded and new social spaces – the Blue Room and Copper Room – created. Older windows were largely replaced. With some minor exceptions this established the clubhouse we see today, although it removed the last vestiges of the original building’s character. 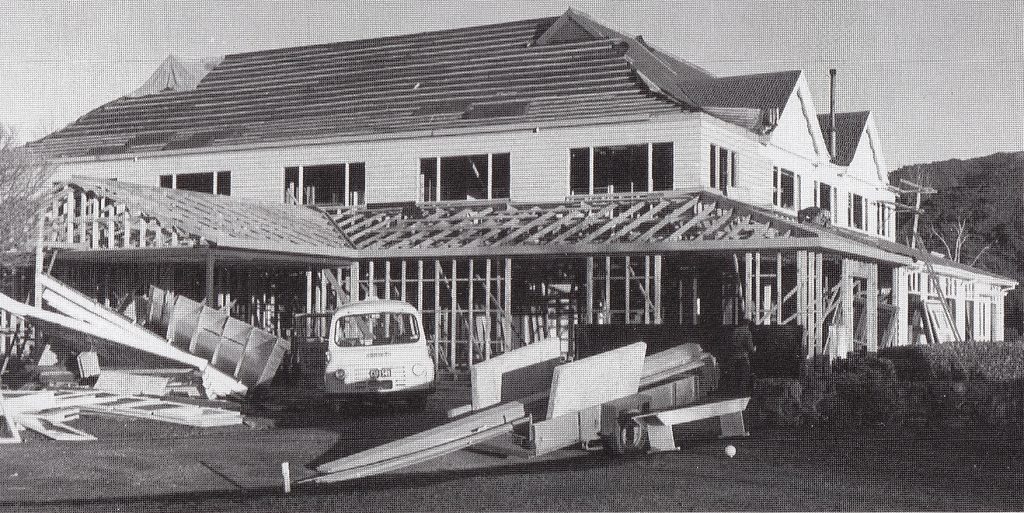 The extensive changes being made to the clubhouse in 1973.

While the footprint hasn’t changed much, other aspects of the clubhouse have. In 1998, the offices and men’s and women’s locker rooms were upgraded. In 2002, the bar was shifted 90° from the centre of the 19th (where it was in the way) to the south wall. In 2003-04, the men’s ablutions were renovated and new foyers provided for the men’s and women’s changing rooms. In 2007, a lift was installed to give less physically able members access to the 1st floor. In 2010, the kitchen was overhauled. The most recent change to the building was a recladding of the roof with new tiles in 2015.

Of course, the clubhouse sits close by other facilities built by the club. Greenkeeper’s sheds were built just west of the clubhouse when it opened. Five grass tennis courts were also installed at that time along with a croquet green. Three courts remain. The pro-shop / club storage building occupies a site that has long been used for club buildings. In 1961, the club built a pool and in 1984 the sprig bar / tennis pavilion was opened alongside the pro-shop.

Further significant changes took place in the 1990s. In 1994, the courts were converted to artificial surfaces. In 1997-98 the greenkeeper’s building was rebuilt on its present location. Soon after, the practice green was moved and the entrance road relocated where the fourth tennis court had been, the pro shop and storage facilities were upgraded and expanded (to allow more members to leave their clubs at the club), the manager’s house was relocated away from the clubhouse and the car park extended.  This arrangement remains largely unchanged to this day.

An aerial image of the club’s buildings in 2007.