Golf is a game that lends itself to socialising. Royal Wellington, like most other golf clubs, has always placed a huge emphasis on pre- and post-golf conviviality. Unsurprisingly, the way we socialise has changed dramatically, particularly in recent decades.

Prior to the move to Heretaunga, members enthusiastically filled the club’s modest Miramar clubrooms over any weekend there was golf to be played. The club had a housekeeper to look after them. When the club moved to Heretaunga it took the plunge and built a big clubhouse, much of it set aside for spacious reception rooms. These spaces, which have been expanded over time, are where members and guests have gathered for generations, to recount the day’s golf and to maintain the camaraderie forged on the course.

From the time of its opening, the building was used for golf-related events, such as afternoon teas after opening and closing days. Formality dominated gatherings inside the clubhouse from the outset, with dress standards matching the expectations of the day. This approach did not really change until the end of last century. Despite the formal attire, the emphasis has always been on having fun.

The biggest influence in establishing the club’s social traditions was the syndicate of members who bought properties subdivided from the club’s land at the time of its opening. These properties were a short walk from the club and their owners were able to quickly turn the Wellington Golf Club into a kind of country club. There was probably nothing like it in New Zealand before the arrival of golf resorts. Weekends were particularly busy, with people staying at the golf club or as guests of members. There was dinner at the club, while important events or the feting of distinguished guests were opportunities for formal gatherings.

The club built a dining room in 1925 and this broadened the range of opportunities for hosting gatherings. Food and beverage and accommodation were generally managed by live-in husband and wife teams, with staff hired to assist with waiting tables and preparing food. Later, the club contracted a caterer until it brought all its food and beverage operations inside the club.

Local members were still a mainstay of the club’s gatherings as the 20th century wore on, bolstered by a second group who bought homes just a short drive away in places such as Silverstream and Upper Hutt. Along with the golf there was tennis or barbecues at the pool, once the latter was built in 1961. There was a particular emphasis around calendar highlights, such as the Baffy and Wellington Provincial (and later the Quaich and Heretaunga Classic), reciprocal events such as the Tuson Cup and Heremore Trophy, and mixed events, such as the Queens Birthday mixed foursomes. The mixing of the sexes has always been at the heart of club culture. 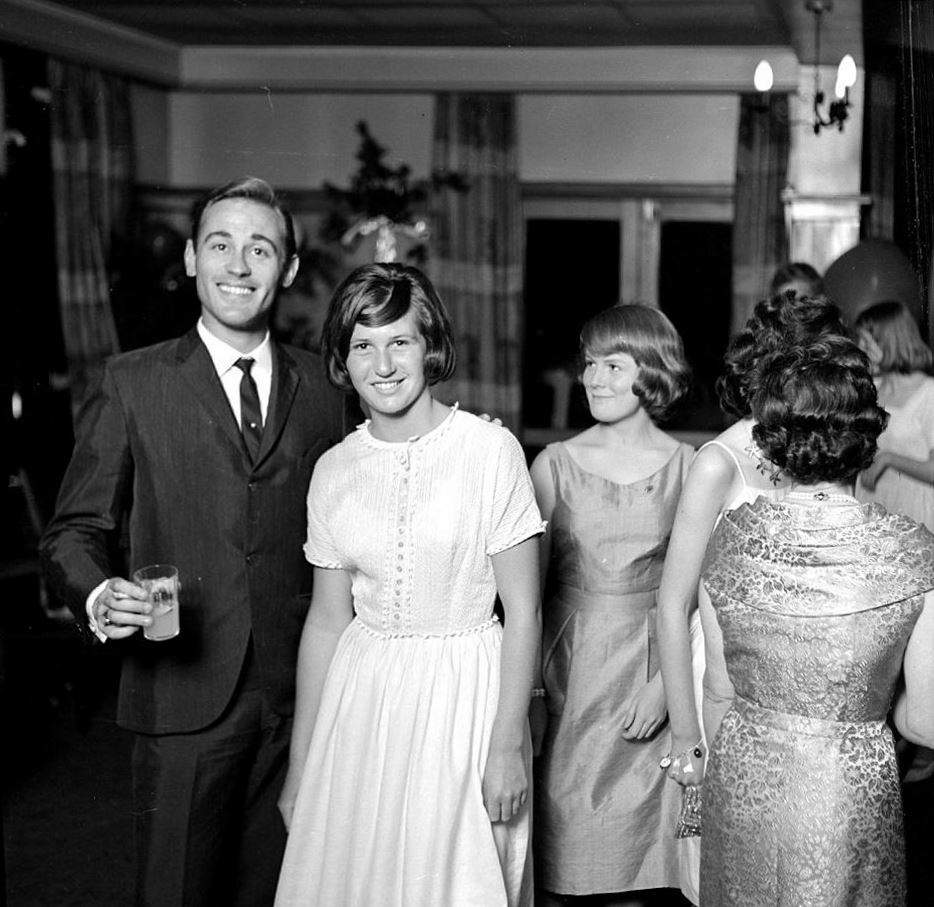 The Upper Hutt Leader sent their photographer Ravelle Jackson to take photographs at several functions at the club in the mid-1960s. Here he captured television personality Peter Sinclair and teenage admirers at a social event for young members and their friends. (P1-6291-8681, Upper Hutt Library)

Until the latter part of the 20th century, wine, and to a lesser extent, beer were not commonly drunk at the club. The focus was more on spirits, with or without a mixer. The club had what might be described as a robust drinking culture, at a time when there vastly fewer social opportunities that there are today. Until well into the second half of the 20th century, evening functions were not particularly hampered by concerns about drinking and driving. It was an offence to drive while alcohol impaired but there was little law enforcement on the road. So, evening functions at the golf club could drift into the early hours and cars would weave uncertainly out the gates and onto Fergusson Drive. Such scenes would be unthinkable today. 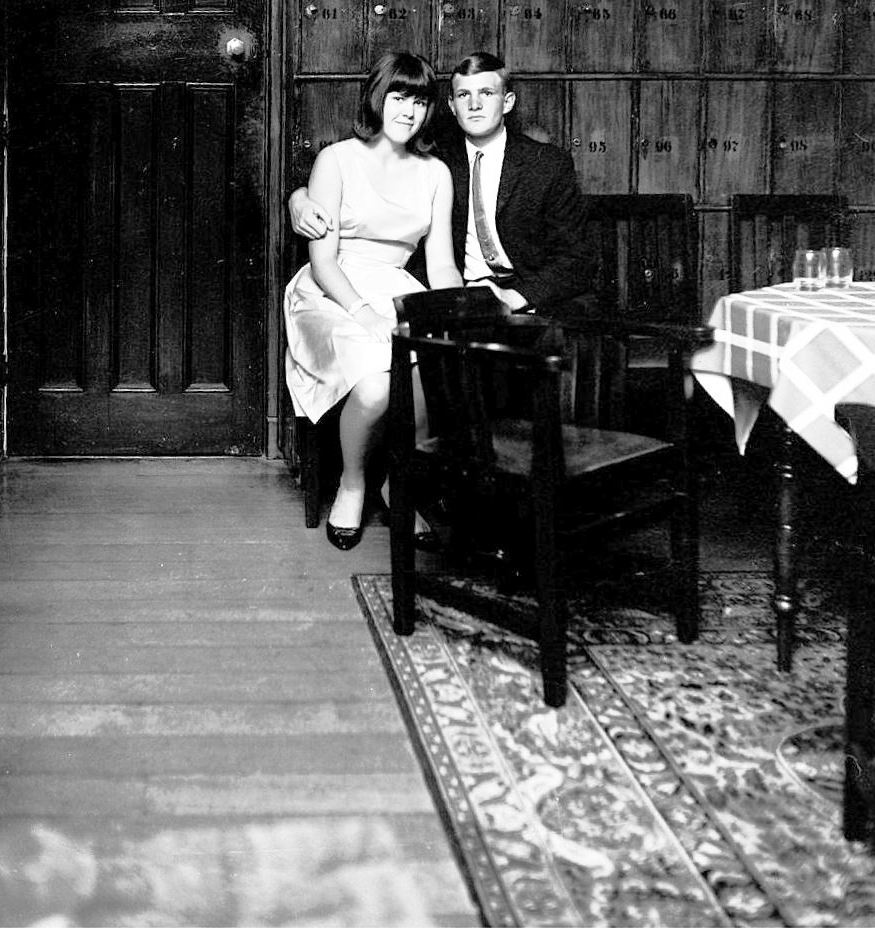 A young couple sitting in the 19th during a function in the club in the mid-1960s. Behind them are the lockers that used to hold members’ bottles. New lockers were later installed in the men’s changing rooms. (P1-6309-8699, Upper Hutt Library)

The club was unusual for not having a working bar for many decades. Up until 1933, the bar was run on an honesty system but, anxious about the legality of this, the club shifted to allowing members to bring their own bottles, which were kept in lockers inside the 19th. (A club full of judges did not want to deal with infractions of licensing laws). The established tradition was that members would drink out of their golfing partner’s bottle. To outsiders, this was all very quaint and a little confusing. Of course, this arrangement deprived the club of income, so it was eventually phased out in 2009 during Marty Scott’s captaincy and all refreshments bought from the bar. Also gone is smoking, which was ubiquitous inside the clubrooms for much of the club’s history, but was done away with by a law change in 2004. 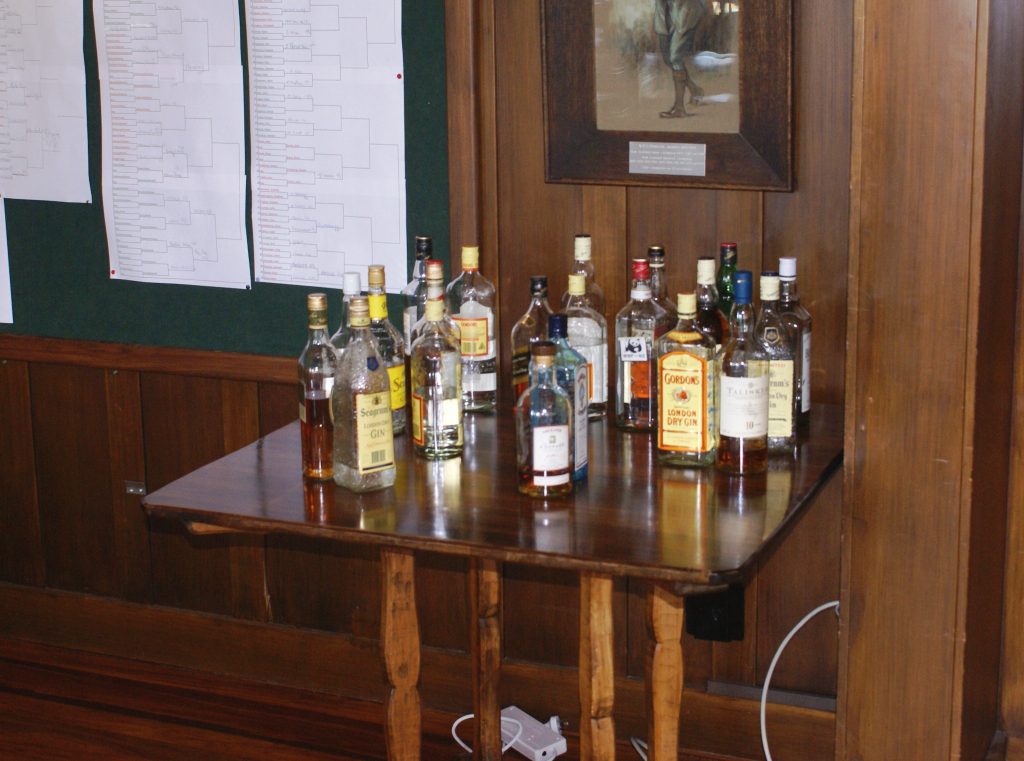 Members’ bottle waiting for their owners to return from a round of golf. (M. Kelly)

Another significant change came in the mid-1990s, when then captain Ian Young pushed through a change to relax the rules on clubhouse attire. No longer was a tie and jacket necessary in the 19th before 6pm and use of the clubhouse quickly rose. Important dinners still require formal dress but even these rules are starting to be relaxed.

A typical scene at the ever-popular Sunday roast, 2019.

Today, event organisation is of an entirely different level and the club has gone to great trouble to lift the quality of its hospitality to match public expectations. At the heart of it all remains the clubhouse, the focus of the club’s socialising and hospitality.