The evolution of the golf course

When the club began its move to Heretaunga late in 1906, its first professional, Englishman John Cuthbert, was given the responsibility for laying the course out. On what was pretty much a blank canvas – just trees and water courses to consider – he composed a course of straight away holes and doglegs, with a typical mixture of par 3s, 4s and 5s. Par was 72.

Greenkeeper Tom Milligan and volunteers worked tirelessly to turn unkempt paddocks into fairways.  Hastings horticulturist Thomas Horton provided hundreds of trees to beautify the course and demarcate holes. In this period before mechanised mowers, sheep were brought in to keep the grass down. A number of the corridors formed in 1908 still survive today in the Heretaunga course and the Terrace nine.

At the time of its opening in April 1908, the tees and greens were temporary or unfinished and there was no bunkering. When he left, Cuthbert was not replaced, so completion of the course was undertaken under the instruction of visiting Australian professional Gilbert Martin in 1909, who helped design the Australian Golf Club’s original course in 1903. The greens themselves were mostly flat and featureless or, occasionally, conspicuously lifted above the surrounding fairway. The bunkers were largely shallow.

A crowd gathered around the 18th green at the New Zealand Ladies Championship, 1911. In the background, looking akin to beached whales, are the various sod walls built to add more variety to the course.

One of the most distinctive features of the early course was the formation of sod walls on fairways and near greens to liven up the otherwise flat course. These walls were softened into mounds over time or removed, but remnants can still be found on the Terrace Course. One conspicuous survivor is on the 7th, where tee shots need to crest an angled hump about 160 metres from the Black and White tee or skirt it on the left, where room was later provided for members unhappy with the required carry.

The club made quick progress and within a decade the course was well-established and already being complimented for its beauty. While the quality of the fairways and greens improved significantly, most changes to the course layout were incremental. In the 1920s, six fairway bunkers with sod walls were built and some holes lengthened. Otherwise, the moving of the odd green or tee excepted, the course stayed largely as it was in 1908. In 1931, designs for new fairway and green-side bunkers and back tees were commissioned (from an unknown course architect) but not built because of the Depression. In 1935, a report from English-born course architect Charles Redhead, who was consulting all over the country during this time, did lead to the redesign of a number of greens and bunkers. 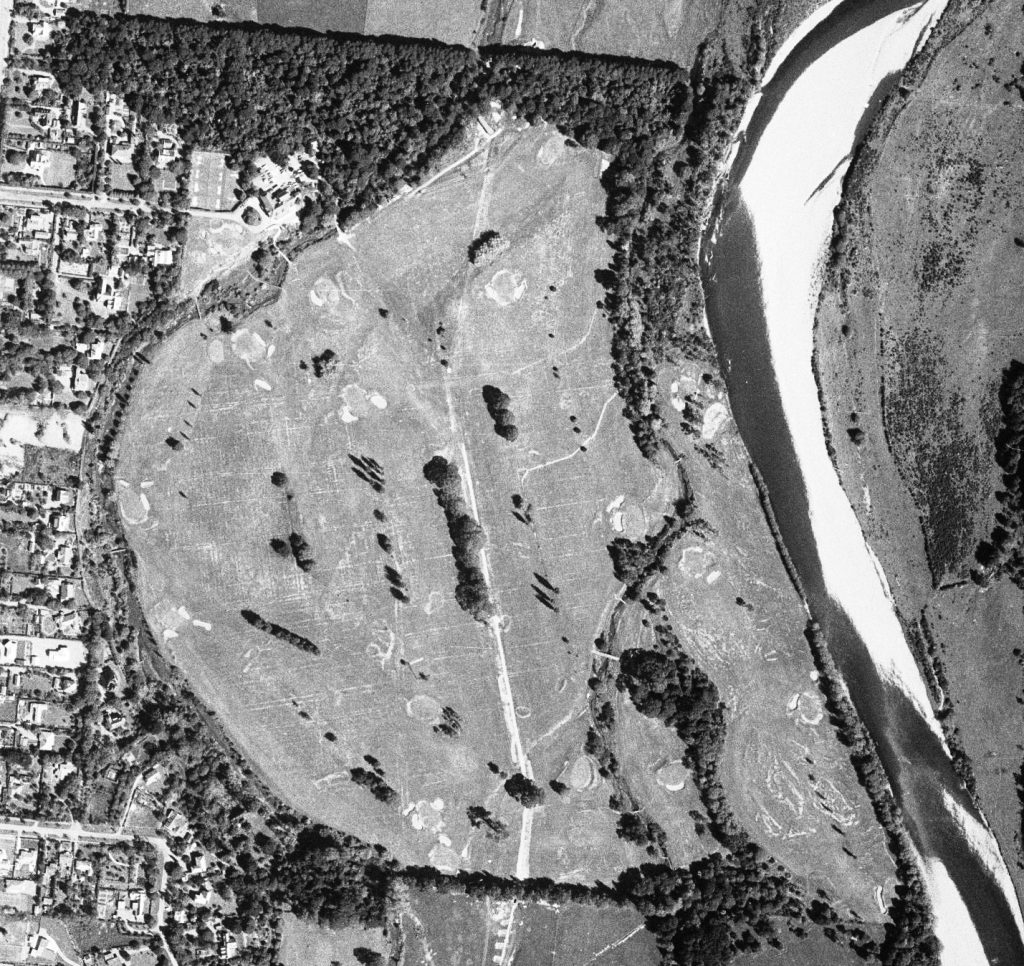 An aerial image of the course in 1957. Vegetation between fairways was still pretty sparse. (Image courtesy of Retrolens.nz, SN1005)

The first significant change to the course came in 1972-74 when the club made use of land it had previously purchased on its southern and northern boundaries and built six new holes to a design by New Zealand-born, Australian-based course designer Sloan Morpeth and his assistant J.S. Watson. 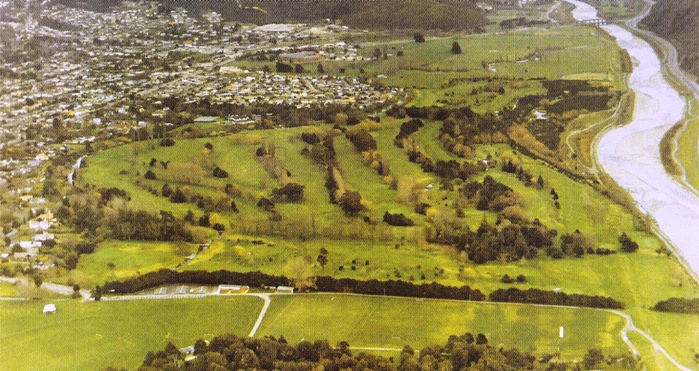 The course in 1974, with the Hutt River realigned and additional holes added to the north and south of the original 18 holes.

The former died before work got underway but Watson supervised construction to its conclusion. A new championship course incorporating new and old holes was augmented by what became known as the ‘inner-nine’. A shorter and less testing course, it consisted mostly of old holes, with a par 5 split into two holes and two new short holes added. One of these, the current 5th on the Terrace nine, has the only earth green left on the property.

As the 20th century came to a close, the club became more aware of the limitations of its course. Attention turned firstly to the greens, which lacked variety and, being earth-based, were difficult to maintain. New sand-based greens, designed by Sir Bob Charles and John Darby, were built in stages from 1992 to 1994. By early 1995, all the greens were back in play.

Although they offered a much different playing experience, the new greens were symptomatic of the club’s piecemeal approach to course development. The feeling was growing that the championship course lacked cohesion and strategic interest and did not make full use of the visual qualities of its streams and trees.

So, from 2003, the club threw its energies into developing a course that would make the best of the club’s land. There were false starts along the way and it was not until 2009 that Greg Turner and Scott Macpherson of Turner Macpherson Golf Design were appointed to undertake the design, to a brief provided by the club. The funds for the project came largely from members, led by significant donations from four families. 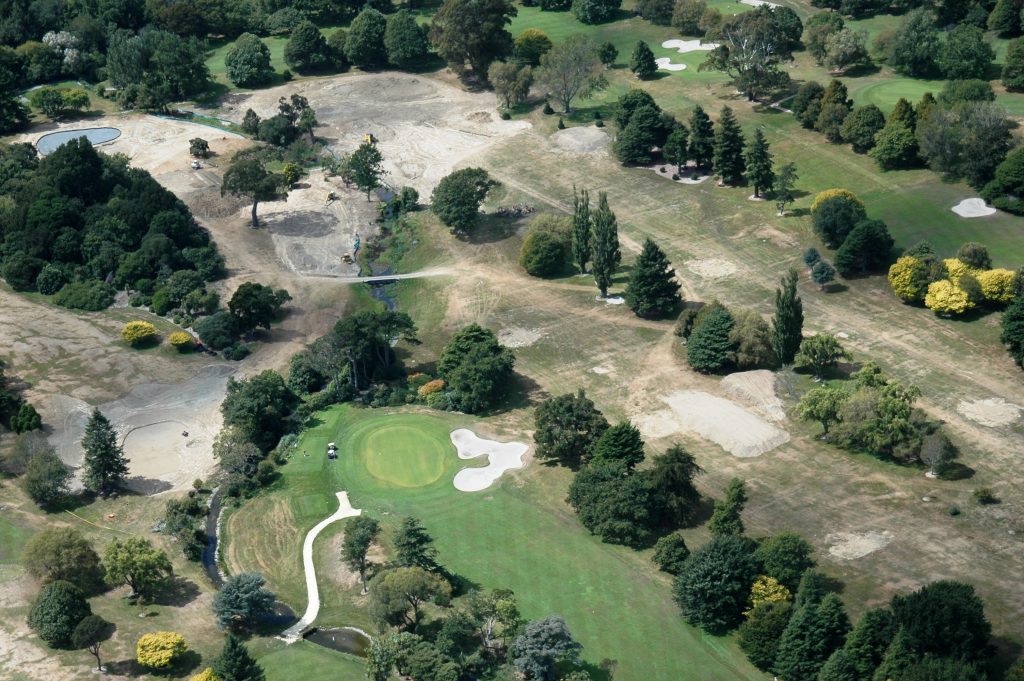 Work on the redevelopment underway, early 2011. The old 5th green is untouched while work has started on the new 8th, 11th and 12th greens.

A new championship course (the Heretaunga course) was created using old corridors and land under a plantation pine forest near the Hutt River, acquired after a straightening of the river in the late 1960s. Water courses were incorporated into holes and copses of native forest used as backdrops. The balance of the holes, on the northern half of the club’s property, was set aside for a nine-hole course – the Terrace nine.  The new course opened for play on the weekend of 15-17 March 2013 and was formally opened in a week of celebration in February 2014.

With a course to be proud of, the club continues to look for ways to beautify the property, conserve flora and fauna and to make practical improvements, such as the on-going efforts to rid poa annua from the fairways and rough. Maintaining a high-class golf course is a never-ending challenge.

The evolution of the golf course